Should I let my iPhone send debugging information to Apple?

Like many—if not most—iPhone owners, I recently upgraded to iOS 5. As part of the upgrade process, the phone asked me if I would let it send debugging information to Apple. I instinctively answered ‘no’. However, after a bit of fiddling I found that you can view the data that it wants to send, so I decided to do a bit more digging, and eventually changed my mind. Here’s why.

Before I get stuck in, if you’re not prepared to take Apple at its word, say ‘no’ and stop reading now. I am assuming, amongst other things, that the data available to view on the phone is the sum total of what is transferred to Apple. If you’re not comfortable with that assumption, then this isn’t for you (but this might be). In the end it’s a personal choice, and here I hope to give enough information for you to make an informed decision.

Firstly I’m going to look at Apple’s stated policies on data collection: what it will and won’t collect, how you can control what data is sent, and what happens to the data once it’s been collected. After that, I’ll be taking a closer look at the data itself. 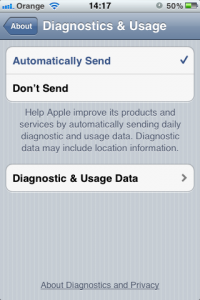 The starting point is Apple’s statement about diagnostics and privacy, which can be viewed in Settings -> General -> About -> Diagnostics & Usage, and tapping on About Diagnostics and Privacy at the bottom of the screen.

The text is only about two screens’ worth and is written in plain English. The salient points are: 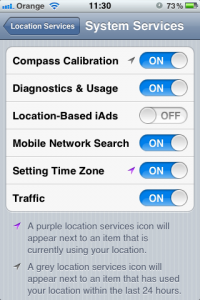 Location information can be removed from the diagnostics in Location Services -> System Services (you’ll have to scroll right to the bottom for the latter), and setting the ‘Diagnostics & Usage’ option as you wish. Interestingly, the wee icon is absent from the setting on my phone, meaning that location services haven’t been used for diagnostic purposes in the last 24 hours. Perhaps it’s not used very often, or only when certain types of failure occur.

Right, let’s look at the interesting stuff: the data. Tapping ‘Diagnostic & Usage Data’ will display a long list of log files, all of which have timestamps. There are several types of file I’ve seen on my phone, so let’s look at each of them (there are undoubtedly other types of logs that could be generated, but these are the ones I’ve seen).

I have no idea what awdd is. I’m not an iOS developer and Google isn’t shedding any light either, so I’m going to assume it’s the Advanced Whisky Distillery Daemon. Sounds reasonable to me. These logs seem to get written between ten and over a hundred times a day.

Interestingly, the deviceId string is the same length as the UDID reported by iTunes, but it’s completely different. However, it is the same in every logfile, so presumably it is unique to my device. Maybe it’s hashed in some way.

The rest of this file looks fairly uninteresting. I suspect that the securityType relates to the type of wireless network I was using at the time (on the other hand, they could relate to the colour of whisky; who knows?). Every file I’ve looked at has the same value in this field. In any event, I don’t see anything here that concerns me.

These files are in XML format and are generated once a day. They contain statistics on app usage that look like this (I’ve aggregated the entries for the Amazon UK app):

So I’d be telling Apple how often I launch apps and how long they’re open for. There’s also some more data about how many SMSs and iMessages were sent, and how many times the phone has woken up for various different reasons. Personally I don’t mind them knowing about any of that.

Not much explanation required here. These logs are short, so I’ll reproduce the whole thing:

It looks like the report is identified using a randomly generated UUID, and it gives the hardware and OS version of my phone. Also present is a summary of what was going on when the battery was low, and some very general usage statistics. I suppose this might be useful in cases where lots of people are reporting poor battery life, and particular apps or functions are suspected as culprits.

This report consists of a header, followed by a table of processes along with their corresponding number of pages resident in memory. Some of these are apps, others are internal iOS processes. I’ve removed most of the processes for the sake of brevity, but you get the general idea. It looks like I was using the web browser when my phone ran low on memory.

Interestingly the kernel version and build number is given at the top, along with another UUID. The processes can make interesting reading; for example, eapolclient is presumably the supplicant process used to talk to the RADIUS-backed wireless network I’d have been using at the time (one of the protocols used for authentication is called EAP). Perhaps BTServer is something to do with Bluetooth, although it would have been switched off at the time the report was generated.

These are arguably the most interesting logs, and form the main reason why I decided to enable diagnostic reporting on my phone. They’re generated every time an app crashes or has some type of unexpected problem. According to this article by Apple,

If the application was distributed via the App Store and the user has chosen to submit crash logs to Apple, the crash log will be uploaded and the developer can download it via iTunes Connect.

Here’s part of an example that was generated when Safari fell over:

There’s the ubiquitous UUID at the top, followed by some lines identifying the particular app that crashed; in this case, ‘MobileSafari’. The most interesting bit is at the bottom, where we see that it received the bane of every Unix programmer’s life: a segmentation fault (‘SIGSEGV’). Without going into too much detail, this means that Safari—specifically, thread 9 of the process—attempted to access unaddressable memory. The operating system sends a signal to the process, which is invariably fatal.

What follows is a goldmine for the developers:

This is a stack trace of the crashed thread, followed by a dump of the processor’s registers at the time of the crash (the other threads are also present in the file, but I’ve omitted them). There’s enough information here for the developers to see precisely what happened, where in their code it happened, and what the conditions were that led to the crash.

The next section of the file is a long list of images present in memory at the time of the crash, and looks like this (again edited for brevity):

There’s no suspiciously personal information here, just the kind of data a developer would want if they were debugging their app.

Summary, and a bit of reiteration

I can’t stress enough that the app crash data is invaluable to developers. I don’t know how much data Apple actually releases to developers, but they have the potential to know about every instance of their application crashing, anywhere in the world. More data = bugs fixed faster = happy users… and this is why I switched on diagnostic data collection on my iPhone. I want developers, including those at Apple, to have everything they need to fix unpleasant bugs in their code; when the bad App Store reviews start flooding in, they’ll have a parallel source of data with which they can smash the bugs and make everything wonderful again.

I hope this article has made you consider doing the same.

‘Sovereign’ citizens in the UK: a study in nonsense