Dying of AIDS? Cheer up: you’d have died eventually anyway!

As I slowly go through all my old radio memorabilia, I’m rediscovering all sorts of interesting things that I haven’t seen for decades. They range from the mundane to the historically fascinating, but this particular example is perhaps the most unpleasant item I’ve found so far.

In 1990, I loved lying on the floor listening to HCJB Ecuador ‘The Voice of the Andes’: the music was so full of life, and everything about it just seemed so far away. Somehow its core message of Christian evangelism completely passed me by—growing up as a secular Jew, I unconsciously glazed over whenever someone started talking about religion. In that vein, I must have opened my Ecuadorian post and put it straight in its little plastic pouch without even reading it. 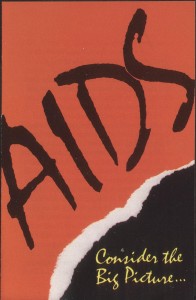 Which brings us to this little gem: a leaflet entitled AIDS: Consider the Big Picture, published by ‘Good News Publishers’ in the US. When I first found it, I assumed it would be a stock rant against sexual deviants (or whatever term this particular band of lunatics preferred). In fact it starts moderately, briefly setting out the facts, and merely hinting that

These facts have already caused millions of Americans to reconsider their sexual behavior.

Then it gets strange, and—to my mind—deeply unpleasant.

There is a greater problem in which each of us is in the high risk group. It is an incurable condition that you and I have lived with from the moment we were born. AIDS is only one of the possible terminal stages. The mortality rate is 100%.

Have you guessed what it is yet?

But whether we die from AIDS or old age, we all will die. These are the facts. … Death is not the end of life; it is a door to eternal life. [emphasis in original]

What a sickening, tactless, tasteless and repugnant thing to say. Remember that this was 1990, when treatments for AIDS were experimental and scarce; a time where the disease would inevitably reach its terminal conclusion. Presumably the author of this tract would say the same to a young child dying of leukaemia, or a stab victim bleeding to death on the street. It goes on with the usual boilerplate about God and Jesus and forgiveness and eternal life, as if those empty words mean anything to a non-believer enduring a painful death. If you can bear it, the full text can be found here and here.

I’m not particularly surprised to find that HCJB still exists: these outfits never seem to go away (as I write, their headline is Bringing God’s Word to the Arab World, presumably because what that part of the world really needs is more religion). It also looks like they’re still spreading the same message, like this gem from an undated press release on their website:

Those who have this disease come to grips with their mortality and those caring for them, especially providing antiretrovirals, are in a unique position to share Christ.

Of course they’re right, if by ‘in a unique position’ they’re referring to the desperate trust placed in them by their sick and dying patients, and the abuse of that trust by holding life-saving medicine in one hand and a crucifix in the other. It’s difficult to see how such an evangelical medic could maintain the necessary professional detachment.

It saddens me to admit that I was part of the problem: in my ignorance, I sent them some money to join their radio enthusiasts’ club. I can’t remember exactly how much, but now I feel very stupid indeed. I’ll add it to the list of things I’d like to tell my younger self when I eventually get round to inventing that time machine. If this post suddenly disappears, you can assume that I was successful.