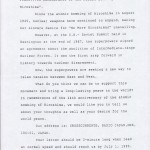 Radio Japan’s CROSSCURRENTS has chosen as its theme for August 1989, “My Deepest Desire for world Peace…in Remembrance of the Atomic Bombing of Hiroshima”.

Since the atomic bombing of Hiroshima in August 1945, nuclear weapons have continued to expand, making our sincere desire for “No More Hiroshimas” unavailing.

However, at the U.S.- Soviet Summit held in Washington at the end of 1981, the superpowers signed an agreement about the abolition of IntermediateÃ¢â‚¬â€range Nuclear Forces. It was the first step forward in history towards nuclear disarmament.

Now, the superpowers are seeking a new way to relax tension between East and West.

What do you think we can do to support this movement and bring a longÃ¢â‚¬â€lasting peace to the world? In remembrance of the 44th anniversary of the atomic bombing of Hiroshima, we would like you to tell us about your thoughts as well as your desire for the world peace.

Your letter should be 3-minute long when read at normal speed and should reach us by July 1, 1989.

We will send a special souvenir to everyone whose letter is used in our program.