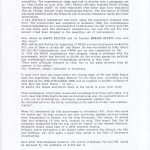 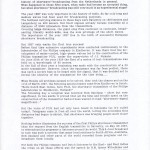 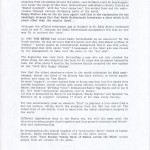 Regular shortwave transmissions to any part of the world were now a practical possibility. The experimental stage just had to develop into a permanent set up. That is why on June 18th, 1927, Philips officially founded PHOHI (Philips Omroep Holland Indie). On their stationery from these days they translated this as: Philips Holland-India Broadcasting Station. The foundation of PHOHI was made possible with the financial aid of several companies, banks and other institutions.

A new shortwave transmitter was built, using the experience obtained from PCJJ. The construction was completed in December 1928, the transmissions started immediately on a wavelength of 16,88 meters; its call-letters were PHI. So now there were two shortwave transmitters, the new PHI and PCJ (the second J had been dropped in the meantime out of convenience).

Now, where do HAPPY STATION and its founder EDWARD STARTZ come into this story? Well, before and during the beginning of PHOHI several announcers worked for PCJ, one of them a certain Mr. van Heurn. He was succeeded by Eddy Startz for the PCJ transmissions, once PHOHI got its own transmitter in ’28. In 1930 the PHOHI tranmissions were stopped, owing to problems with the government, which had decided to divide all the airtime among the political and confessional national broadcasting societies of that time. (They were officially resumed in 1934, due to the many protests from all
corners of the globe.) PCJ, however, simply continued to broadcast.

It must have been two years before the closing down of PHI that Eddy Startz used the expression “the Happy Station” for the first time. According to him that was on the 19th of November 1928, but no tangible or audible evidence of that fact has been found – so far….. So maybe the oldest shortwave-show in the world is even older still!

From newspapers, interviews, books and recordings from those early days, it is very clear that Eddy Startz became an international star, the personification of a new era in broadcasting, shortwave ambassador number one. He travelled all over the world, lecturing on the marvels of this “new communication”.

When PCJ celebrated its 10th anniversary in November 1937, there was cause for double joy. On that occasion two new, revolving, wooden antenna towers were inaugurated in Huizen, not far from Hilversum. The towers, 65 meters high and weighing 18 tons each, rotated on rails. This meant that the 24 antennas, suspended from the top, could be “aimed” in any desired direction.
Reception would equal that of a 2000 kilowatt station. Holland, which had gotten a bit behind other countries like Britain, the USA and Germany, was once again a giant step ahead in the field of shortwave broadcasting.

Soon after this milestone however, the voices of Holland, PCJ and PHI, would be silenced by the outbreak of world-war II.

After the war, during which no shortwave came out of Holland, many people quickly picked up the pieces where they had left off in 1940. And so, on the 15th of April, 1947, the Foundation: RADIO NEDERLAND WERELDOMROEP, the Dutch World Broadcasting System, came into existence. The logical consequence, one might say, of the pre-war success of PCJ and PHI.

On the occasion of the 60th anniversary of the HAPPY STATION SHOW, the oldest shortwave program in the world, it seems justified to delve into the history of shortwave-broadcasting from the Netherlands in general. What happened in those first years, when radio had become an accepted thing, but when shortwave-broadcasting was still very much in an experimental stage?

The year 1927 was very important in the history of radio. So far only long and medium waves had been used for broadcasting purposes. The farthest carrying stations in those days were Daventry on 1600 meters and Langenberg on 469 meters. But their signals already became inaudible at a distance of 2000 kilometers from the transmitters. Covering large distances, the giant step from continent to continent, broadcasting literally world-wide, was the sole privilege of the short waves. The importance of the year 1927 lies in the birth of successful European shortwave broadcasting.

But 1927 only marks the first true success! Before that time extensive experiments were conducted continuously in the laboratories of the Philips company in Eindhoven. It was there that the development of water-cooled, highÃƒÂ¢Ã¢â€šÂ¬Ã¢â‚¬Âpower valves led to the construction of the Philips transmitter PCJJ, under the supervision of J.J. Numans. On June 25th of the year 1926 the first of a series of test-transmissions was held on a wavelength of 90 meters. In the fall of that year a beginning was made with the construction of a 80 meter transmitter. However, since the equipment was far from perfect, there was such a severe hum to be heard with the signal, that it was decided not to reveal the identity of the transmitter for the time being…..

When finally all problems seemed to be solved, they took the chance and on the llth of March 1927, the following announcement came from Eindhoven in Dutch: “Hello Dutch East Indies, here PCJJ, the shortwave transmitter of the Philips
laboratoires in Eindhoven, Holland!” The following day a telegram was received from Bandung – short but very significant. In two words it proved that all the time and trouble spent on the construction of the transmitter had not been wasted. It read: “shortwave-signal magnificent…”

But the voice of PCJJ had not only been heard in Indonesia (as it’s called today). Telegrams came in from all over the world, telling the scientists that distances had begun to shrink, that shortwave was bringing people much closer together.

Nothing better illustrates the success of the first Philips shortwave transmitter than the request from the English transmitter in Daventry, on May 20 1927, to rebroadcast its programs to listeners around the world. This 6-hour broadcast in turn was such a success that many local stations in South Africa, Australia, New Zealand and other parts of the world recorded these programs and re-broadcast them locally. For both the Philips company and Dutch listeners in the East- and West Indies the crown on all these efforts was the speech by H.M. Queen Wilhelmina and crownprincess Juliana, broadcast to compatriots in the colonies during two successive live transmissions on May 31st and June lst 1927.

The tremendous popularity that Eddy Startz had acquired caused an immediate response from thousands around the globe, once Holland could be heard again. And under the wings of this truly international radiostation Startz thrived as “Mister Goodwill”, with his “nice cuppa tea”, theÃƒÂ¢Ã¢â€šÂ¬Ã‹Å“ animal farm and his radio-cruises through various intriguing parts of the world. Happy Station was on the air once again! And that is the explanation for the seemingly strange fact that Radio Netherlands broadcasts a show which is 20years older than the station itself….

Although the official retirement age in Holland is 65, Eddy Startz continued until he was 71, because the Radio Netherlands management felt that no-one was fit to succeed the “star”.

In 1965 TOM MEYER had joined Radio Netherlands as an announcer for the Dutch section. He was 40 years Startz’s junior and they had almost nothing in common – except maybe an international background. But it was this young, multilingual man (who spoke “only” 6 languages at the time) who was chosen by the management to take over the place in the “hot seat”.

The beginning was very hard. Succeeding a man who not only started the whole thing, but who stayed at the helm for 40 years was an almost impossible task. But after about 6 months the listeners finally accepted the new captain on the “Good Ship Happy Station”.

Now that the oldest shortwave-show in the world celebrates its 60th anniversary, almost one third of its history has been written, or better maybe: spoken and sung by Tom Meyer. No more “cuppa’s”, no more animal farm or Sousa marches, but live shows from outside locations; travel stories with sound effects, recorded on the spot by Meyer; the famous “birthday-book”; dramatized Easter Egg Hunts; and to top it all: live inter-continental telephone call-in shows! All this is presented by Meyer in his English “Happy Station” and Spanish “La Estacion de la Alegria”, totalling 17 hours of air-time every Sunday.

For this anniversary-year an absolute “first” is planned: a live-show from a hot-air balloon, during which the audience from the USA can call in! The oldest form of air-travel, hand in hand with the oldest shortwave program in the world.

Different ingredients than in the Startz era, but still the same goal: the intention to bring people closer together and thus promote international friendship and understanding.

By broadcasting this typical example of a “personality-show”, based on human interest, Radio Netherlands fills a void on the short waves. Every week “Your Sunday Family Show of Smiles Across the Miles” unites people from all corners of the globe.