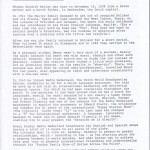 Thomas Hendrik Meijer was born on November 16, 1938 from a Swiss mother and a Dutch father, in Amsterdam, the Dutch capital.

In 1941 the Meijer family managed to get out of occupied Holland and via France, Spain and Cuba reached the West Indies. There, on the islands of Trinidad and Curacao, Tom spent his early childhood and was introduced to his first foreign language, English. (For a long time the only word he knew was “YOU”. This word was used to attract people’s attention, beg for cookies or apologize after running over a duckling with his little red tricycle.)

After the war the family returned to Holland for a short period. Then followed 2½ years in Singapore and in 1948 they settled in the Netherlands once again.

As a pharmacy student Meyer wasn’t very much of a success, mainly (he says) because his heart was with music, theatre and other such affairs. However, the first switch was to study the law instead of pharmacy. Indeed the results there looked a little more promising, not as promising however, as his results in “showÃ¢â‚¬â€biz”. There, his success was such that he turned semiÃ¢â‚¬â€professional, travelled about for two years, also appearing on radio and television occasionally with a one-man show.

In 1965 he joined Radio Nederland, the Dutch World Broadcasting System, answering an ad for a Dutch language announcer. For this he gave up a job with an international marketing and motivation research centre, for which he had been travelling throughout the world. In the meantime it had been proved that he had a knack for languages, mostly (he says) because he’s not really a human being but a parrot….The fact that Meyer spoke Dutch, English, German and French fluently was one of the reasons for the Radio Nederland management to appoint him successor to Edward Startz, the originator and compÃƒÂ©re for 41 years of the international “Happy Station Show”. (The typically Dutch vowel “ij” in his last name was changed to a “Y” for international audiences). A language laboratory managed to teach him to speak Spanish fluently in six weeks, enabling him to also present the “Estación de la Alegría”.

Every Sunday Radio Nederland broadcasts his English and Spanish shows during a total of 15 hours to all parts of the globe. His ultimate goal in life is: harmony. Harmony in personÃ¢â‚¬â€to person relationships, which – according to him – is the starting point for a greater harmony in world matters. And what better way to achieve this goal than to promote international friendship and understanding through his “Sunday Family Show of Smiles Across the Miles”.

It’s not only Ã¢â‚¬ËœKEEPING IN TOUCH WITH THE DUTCH” which he urges you to do, but also Ã¢â‚¬â€ and especially Ã¢â‚¬â€ getting and keeping in touch with each other.