If you’ve arrived here expecting a cache of Marxist-Leninist newspapers, I may have misled you. I am neither a Marxist nor a Leninist (although I do have a soft spot for Imagine), and if I’m completely honest I don’t really know the difference. The title of this post is actually taken from a c1990 programme schedule for Radio Tirana, the English-speaking Albanian equivalent of the BBC World Service. As someone who heard that programme first hand, I can tell you that it was exactly as interesting as it sounds. We’ll get back to Albania shortly, but first a little context.

In the evenings of the late 80s and early 90s, I could invariably be found in my darkened bedroom poring over my little short-wave radio, teasing out snapshots of the world from the ether (yep, I wasn’t what you might call popular… oh for a time machine etc ;-)). In the days before the Internet was widespread, short-wave radio was the most immediate way to get first-hand reports from all over the world, with a bit of wire strung across our back garden to detect the faint signals bouncing off the ionosphere. 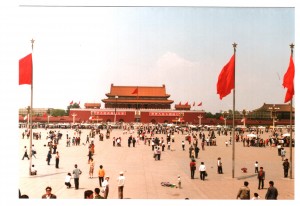 Foreign-language external radio services were—and inevitably still are—sources of propaganda, the only difference being how blatantly the truth was polished. I listened to Radio Beijing playing classical music while an anonymous man stood in front of a tank near Tiananmen Square; I imagined the scene at Radio Baghdad as it broadcast a defiant message in the months leading up to the first Gulf War; I was alarmed at Radio Moscow’s abrupt change of tone when Gorbachev was briefly ousted in Gennady Yanayev’s failed coup attempt (I also have a contemporary TASS feed of the events; it’s also interesting to note that Gorbachev himself credited the BBC World Service as his only reliable source of news).

Of course, not everything was as depressing or momentous. Every Sunday I listened to Tom Meijer on Radio Netherlands‘ ‘Happy Station Show‘, a fun and slightly surreal mix of music, letters and guests. I never quite understood Radio Moscow’s ‘Join us’, a programme which appeared to impose mandatory and structured hilarity upon teenagers. And then, of course, there was the correspondence.

Many of these external radio services were run by a surprisingly small number of people, and often I had the impression that they had no idea if anyone was actually listening: exhortations to write in with reception reports were frequent and sometimes a little desperate. I was happy to oblige, and sent letters all over the world (I remember having to convince my father that Uzbekistan was a real place!). In return I received postcards, books, tourist information, badges, personally written letters, and of course lots of propaganda. It’s been long enough now that some of this stuff is of historical interest, and I’ve started digitising the most interesting bits. It’ll all go online when I’ve finished, but it’s going to be a while: I’m doing it in alphabetical order, and have only just started ‘C’! 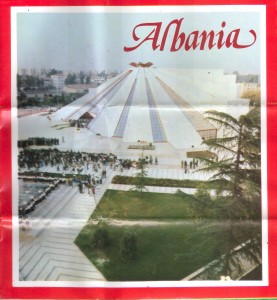 I'm sure Albania is beautiful, but the designer of this propaganda pamphlet clearly didn't agree

Which bring us—finally—to Albania. Radio Tirana, characterised by a woman speaking in a soft monotone, sent me a blank QSL card, a propaganda pamphlet that’s almost a parody of itself, and a copy of their programme schedule that looks like it was typed by a gorilla. The pamphlet contains the obligatory pictures of tractors, heavy industry and brutalist Soviet architecture, alongside graphs of production growth that a cynic might suspect were exaggerated and unsustainable. However, the schedule is by far the most interesting document, because it spells out exactly what the Albanian government wanted the world to know. I reproduce it below, along with a transcription. If Marx—or Lenin for that matter—is your thing, prepare to get misty-eyed. 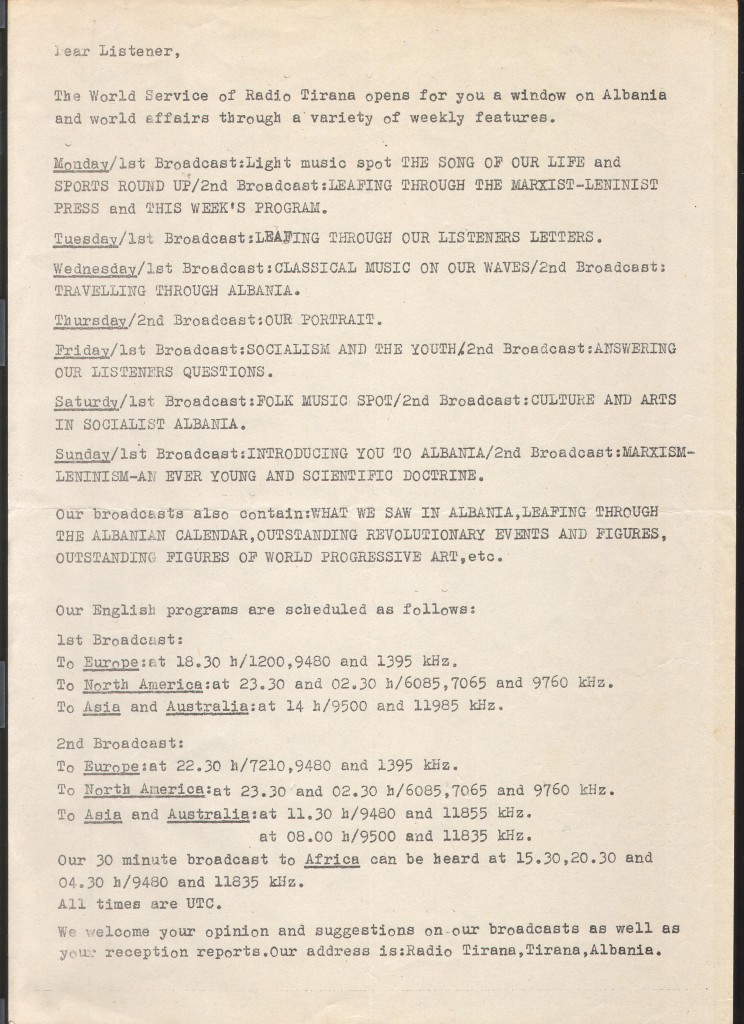 Our English programs are scheduled as follows:

All times are UTC.

We welcome your opinion and suggestions on our broadcasts as well as your reception reports.Our address is:Radio Tirana,Tirana,Albania.